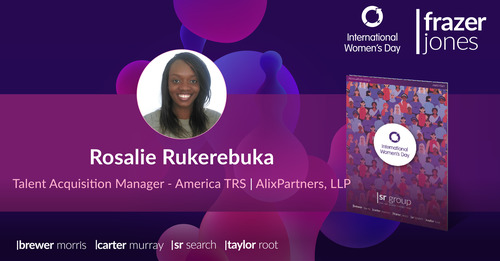 Disclaimer: Please note that all commentary and opinions provided in this interview are those of the individual and not the organisation/company they are employed by.

What skills and attributes do female leaders bring to create diverse leadership at management level?

I recruit people at all levels, including some very experienced professionals, many of whom are already at the top of their industry or sector. Diversity is important to us, and perhaps just as important is the need for all our employees to be inclusive – accepting of others, curious about different perspectives, and willing to extend a hand to colleagues from different backgrounds. Whilst I don’t believe these following skills and attributes are inherent to every woman and/or are not available in men, I like that women tend to bring pragmatism, inclusiveness, interest in negotiation and teamwork into leadership, which naturally creates pathways to more and different types of people. I have also observed similar traits in ethnic minorities in Western countries. I believe this can be attributed to trying to adjust and acclimatize to a culture where you’re not the established or traditional power force, so you find other ways of gaining allegiance and reaching your goals in a leadership role, and this may be true of women too.

What is one lesson you learnt the hard way?

When I started out in my career over a decade ago, I would approach the workplace in the same way as I did during my school years, with regards to making connections and developing relationships. However, the tools that girls use to survive at school do not always translate into a workplace environment. As I progressed in my career, I had to get comfortable with not always being the ‘best friend’ of every person I worked with. I later realized that was an unconscious goal I had created for myself at school, where for girls, your power rests in how ‘liked’ and popular you are. Learning to be comfortable with not being liked in every situation and striving for respect instead will win you trust and respect and stronger working relationships in a more empowering way. It’s a very basic lesson but it was a hard one for me to master at the start of my career, as it went against my natural inclinations.

What impact could Kamala Harris’ appointment to Vice President have on the next generation of female leaders?

I believe it could have a big impact, especially in the US. The photo that was circulating on social media, showing Kamala Harris standing on the backdrop of all her white, male predecessors, was incredibly powerful and inspirational and clarified how historic her appointment is. I’m so excited that younger generations will see a female person of colour in a position of power as ‘normal’, and that they’ll be able to relate to her. I grew up in the UK where Margaret Thatcher led the country as Prime Minister for just over a decade, which overlapped with my younger years. I therefore grew up seeing her on television as an authority figure, and this female leadership seemed normal to me and my generation, which is great. In isolation, female leaders like Kamala Harris can make an impact by being in the role, but there are limitations to how big an impact. We now need to work on societal and workplace values, culture, and infrastructure to give more women access to the top and to stay there.

Why is it important that we “choose to challenge” and call out gender bias, discrimination and stereotyping?

The power of legitimacy people can bring to you by hearing you, listening to you, and publicly acknowledging you, is insurmountable. We all need to learn how to challenge and accept challenge from others without being defensive and instead being forgiving, respectful and supportive of each other’s narratives. If you witness instances of gender bias, discrimination or stereotyping, however small, I encourage you to respectfully challenge the person who you think has the bias and tell them why you don’t think that what they are doing or saying is fair. You don’t need to be aggressive – just try to understand what was meant by the action and explain to them how it made you or may make others feel – but the key thing is doing it at the moment. Staying quiet at the time of the incident can often legitimize the perpetrator of the bias. I appreciate not everyone will feel comfortable or safe speaking out though, in which case, find someone whom you can discuss this with privately. Social media these past few years has shown us exactly how powerful individuals choosing to challenge can be. However, we need to get to a space where challenging doesn’t always equal ‘cancelling’ a person, but instead it is about creating a safe dialogue and removing bias.

Click below to read the full edition of IWD2021 #ChooseToChallenge: Female Leaders Across The Globe.https://indd.adobe.com/embed/bb2678fd-fafb-4e5f-b57b-bbe97612e7cf?startpage=1&allowFullscreen=true